In marketing, it is advantageous to be contrarian, to deviate from the beaten path and stand out from competitors. 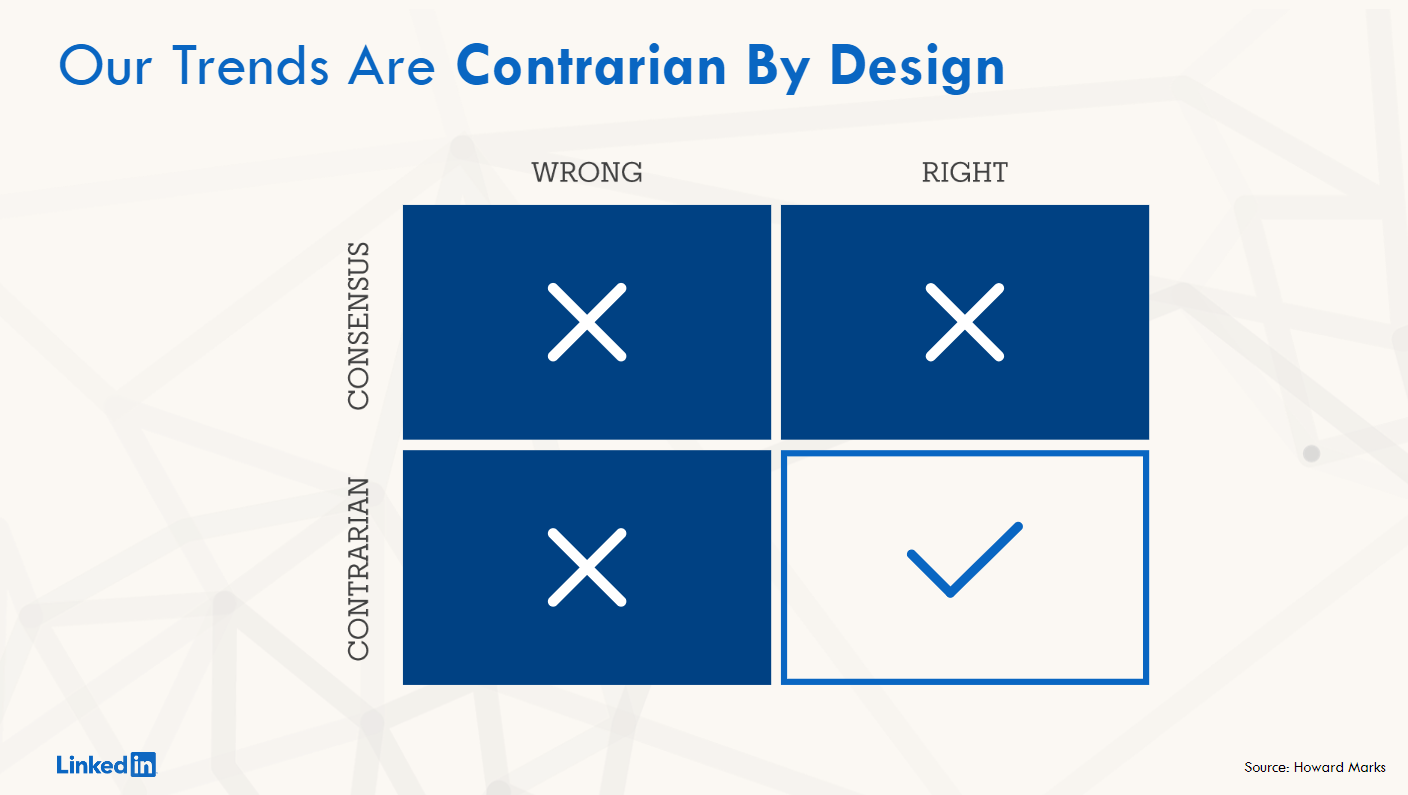 This past week, LinkedIn held their 3rd Annual ‘B2B Trends for the Contrarian Marketer’ presentation hosted by LinkedIn’s own Peter Weinberg, a marketing strategist, who shared the five trends that all B2B marketers should keep top of mind.

While the name might sound extreme, LinkedIn suggests that marketers are quick to celebrate novel, but non-replicable ideas, when, in fact, the key to scientific marketing is “investing in strategies that replicate for thousands of brands”. Often, marketers are concerned with idea “wear-out”, but it’s not always necessary to reinvent the wheel. Successful, replicable campaigns and slogans don’t wear out.

LinkedIn’s Weinberg suggests that good creative “wears in” instead of wears out. For example, Nike’s “Just do it” has been replicated with continued success. 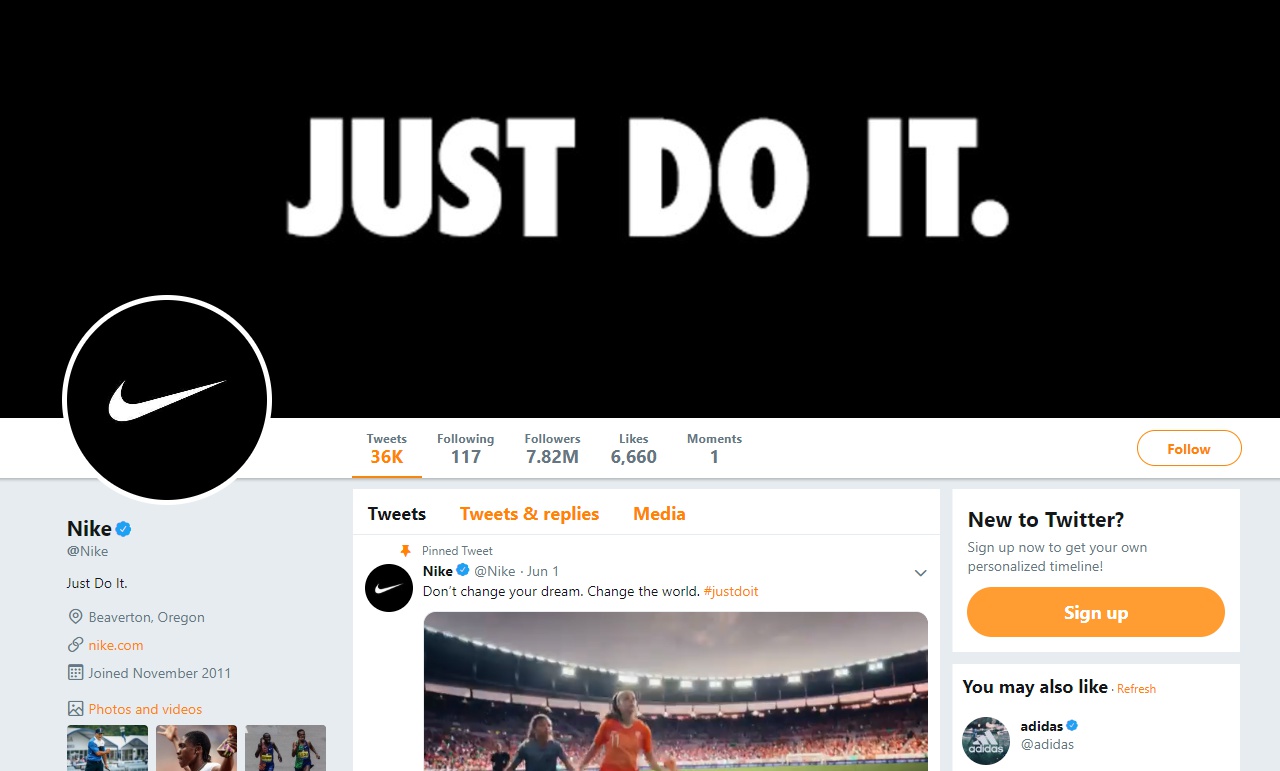 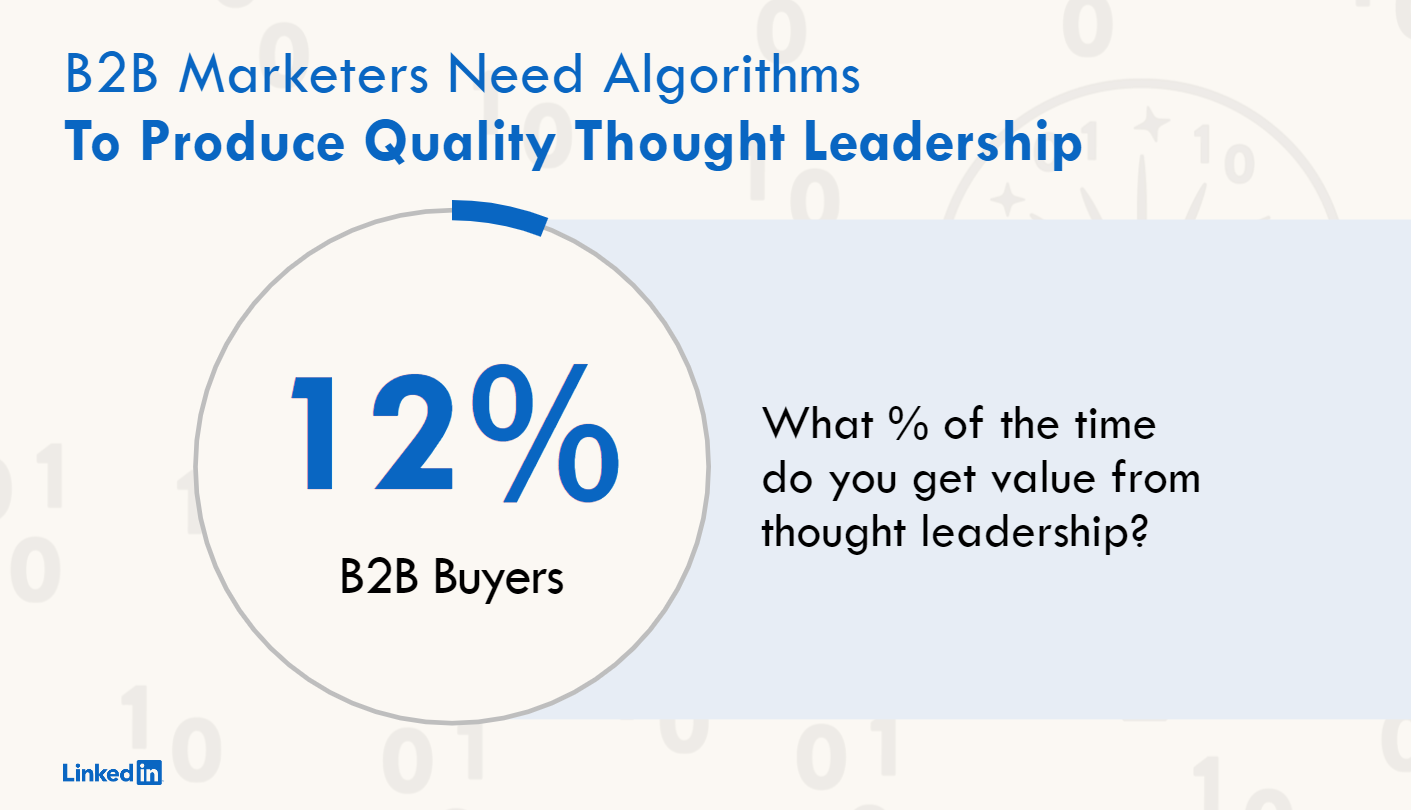 While it may be easy to relegate the use of algorithms to quantitative fields, they are equally necessary in qualitative fields. For B2B marketers, algorithms are necessary to “produce quality thought leadership”, providing value to B2B customers. While it’s possible to tailor an algorithm of your own creation, specific to your brand’s qualifications for “quality thought leadership”, LinkedIn offered their own that they use internally: the S.C.O.R.E algorithm.

LinkedIn suggested that marketers look to the film industry for proof that big bets are more profitable than small bets. 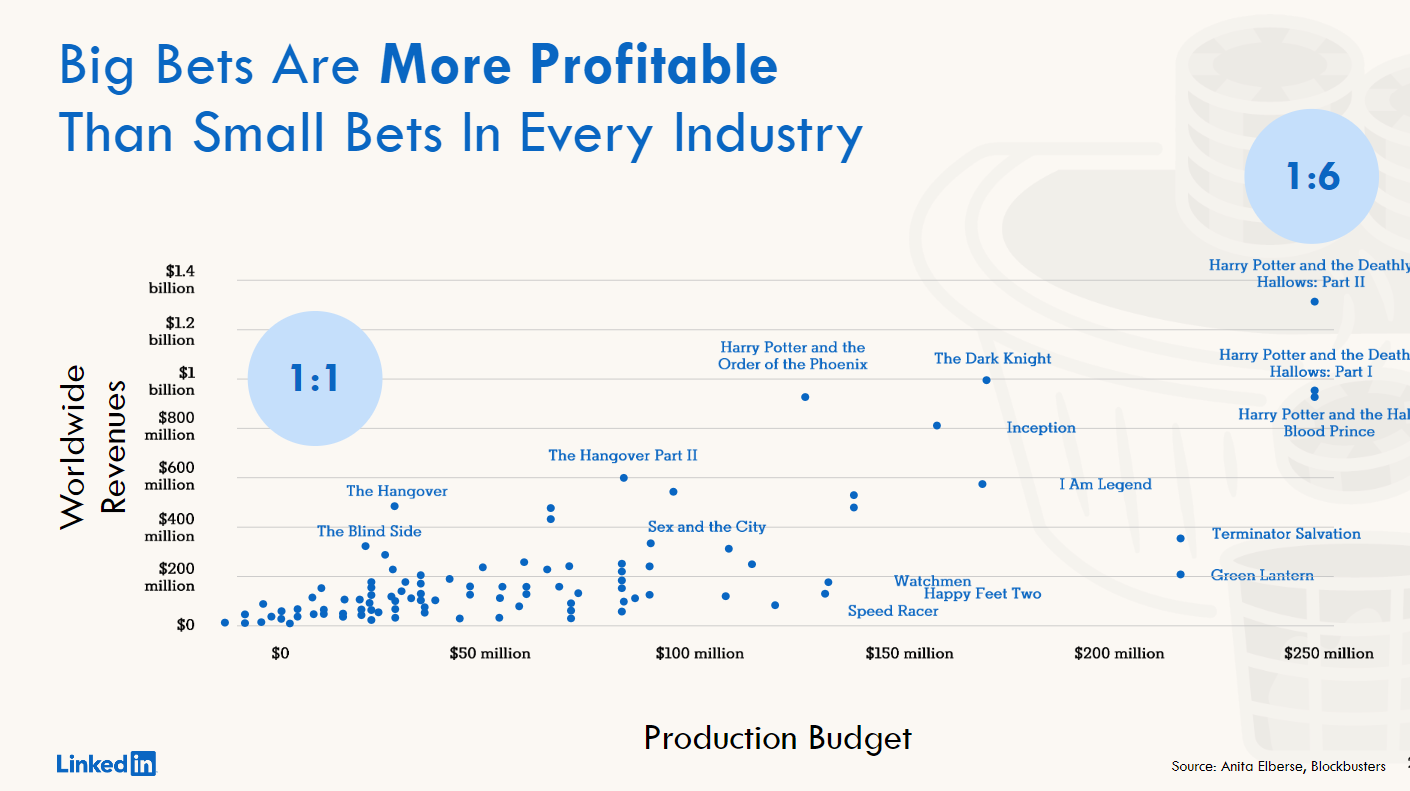 In the film industry, studios see that indie films, which cost less to produce, routinely make less at the box office. On the other hand, tentpole films, mainstream films with big budgets (i.e. any superhero film), consistently make the most for studios.

In marketing, consider Salesforce, who devotes the majority of their budget to a few, large reports throughout the year rather than many, smaller reports. LinkedIn also noted that marketers should remember that big returns require big distribution, restating the importance of reach and voice in your marketing plan.

In front of a room full of marketers, Weinberg boldly stated that “clicks don’t correlate with success.” Going a step further, he went as far to suggest that “optimizing for clicks will kill your brand.” Quick to defend the statement, he explained that the trend is not suggesting that you don’t want potential buyers clicking on your content, but rather that framing your marketing strategy around clicks could be detrimental to your brand.

Though marketers may hesitate to call their content “clickbait”, LinkedIn suggests that content designed with catchy titles, designed to attract clicks often doesn’t make for strong creative. They also expressed that ad fraud (a.k.a. bots) is a considerable issue and that marketers shouldn’t forget how many clicks are robots as opposed to actual buyers. Clicks don’t always equate to leads.

Instead, LinkedIn suggests tracking “impressions and share of voice”. While impressions aren’t an exact science either, they often correlate more closely with dollars than clicks do.

An easy comparison, Weinberg linked the unpredictability in marketing to that found in quantum physics. He explained that scientists used to believe in the “planetary model”, in which it was believed that electrons in atoms moved in predictable patterns, but later switched to the “quantum model”, which determined that electrons move unpredictably.

Similarly, some B2B marketers still abide by a “planetary model”, expecting buying to be predictable, but it’s evidently anything but. 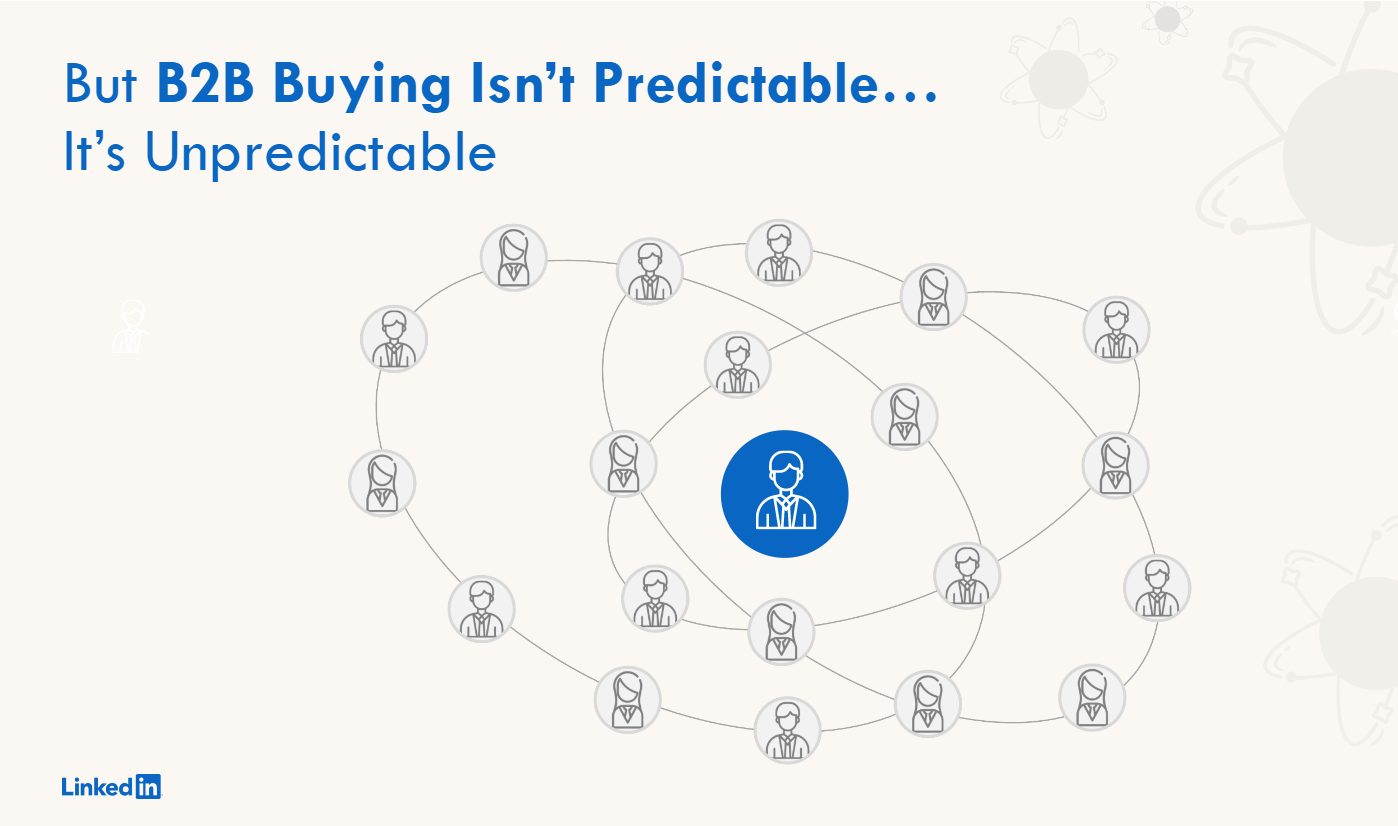 Potential buyers change jobs, titles, even industries all the time and predicting buyers’ habits is like trying to hit a moving target. LinkedIn suggests that broader targeting allows marketers to address issues of unpredictability.

Instagram adds Stories to Explore tab. Here’s how to get on it